So Saturday we moored down before wood lock ? and sunday we moved up some locks to Long Itchington, we like it here, and found a pub or two for a lunchtime ale.  Once again we are missing a blinking beer festival.  It starts next week end at The Two Boats, Grhhh.

Always time it wrong.  However buddied up with a nice couple for the locks, and may see them tomorrow to get through Braunston.

Now heading towards Aylesbury, as we haven’t been down that arm for  a few years and perhaps as far as Berkhamstead, if we get time. And then sadly, end of September, we will be making waves down the Nene and home.

Havent had a run in with many cyclists this year, thank goodness. Although a woman I was talking to at a lock, moved backwards, and not knowing that a cyclist was racing by, managed to “get him off” his bike,. “ oooh” she said “ I didn’t know you were there”.   Well, if he had dringed his bell, he wouldn’t have ended up entangled in his bike, with his head pointing down the ramp towards the towpath.  he was frightfully well spoken, and more embarrassed than anything. He confirmed that he was ok, but I bet he had a few bruises later. He was one of our dusky brothers, so would his bruise show up ?  is that  PC ? .to say that ?  hey ho.

The next fun thing occurred at Bascot staircase lock.  This woman rushes up to me and says “Hi, haven’t seen you in ages,how are you”?   Err sorry, who are you ? Its M…..  No. Sorry don’t think we have met. Whats the name of your boat, its P…. V……. .  Nope, sorry, I don’t think we have met. Anyway I will get on the fill the top lock for us to come in the bottom lock. Says I  Oh no, you mustn’t do that, says she. It will flood all over the place.  We’ll how are we to lift the boats up to the next lock, then?  She was most insistent, so the other woman and I let her have her way, and we continued getting the lock ready for ourselves.  The lady calle M….. was very confused, and had entered the top lock of the staircase, without emptying the bottom lock of the staircase, so hence water, water everywhere and everyone flummoxed.  She was totally confused as to who was who, and seemed to think that I had 2 chocolate Labradors etc.  I am so glad that I am not the only one to have these moments.

Now moored out in  the sticks near Wolfamcote.  Buzzards are about, and hopefully there may be some owls again. Like last night.  We had one wheezing and hooting in a tree near the boat.  Aaaah. 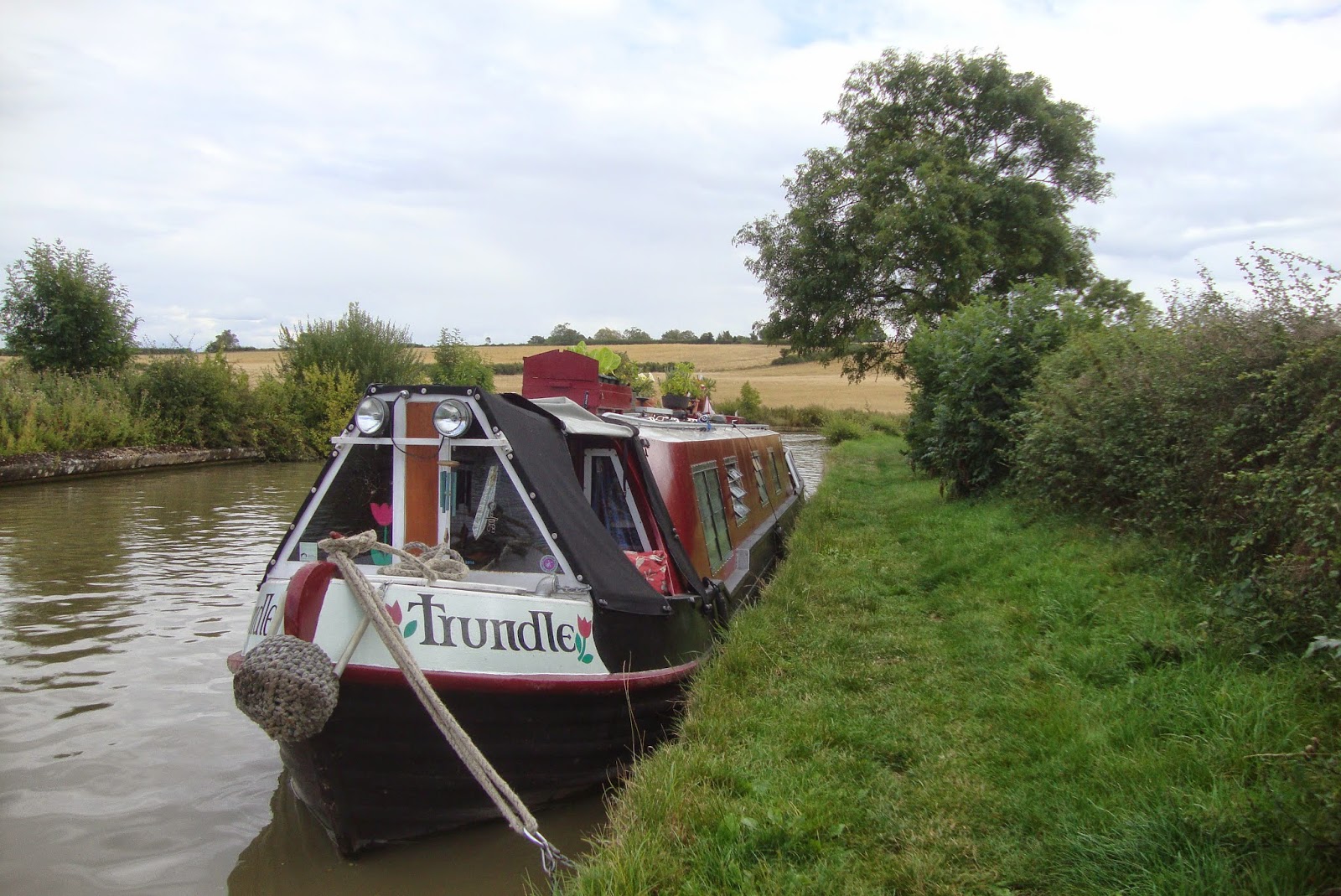 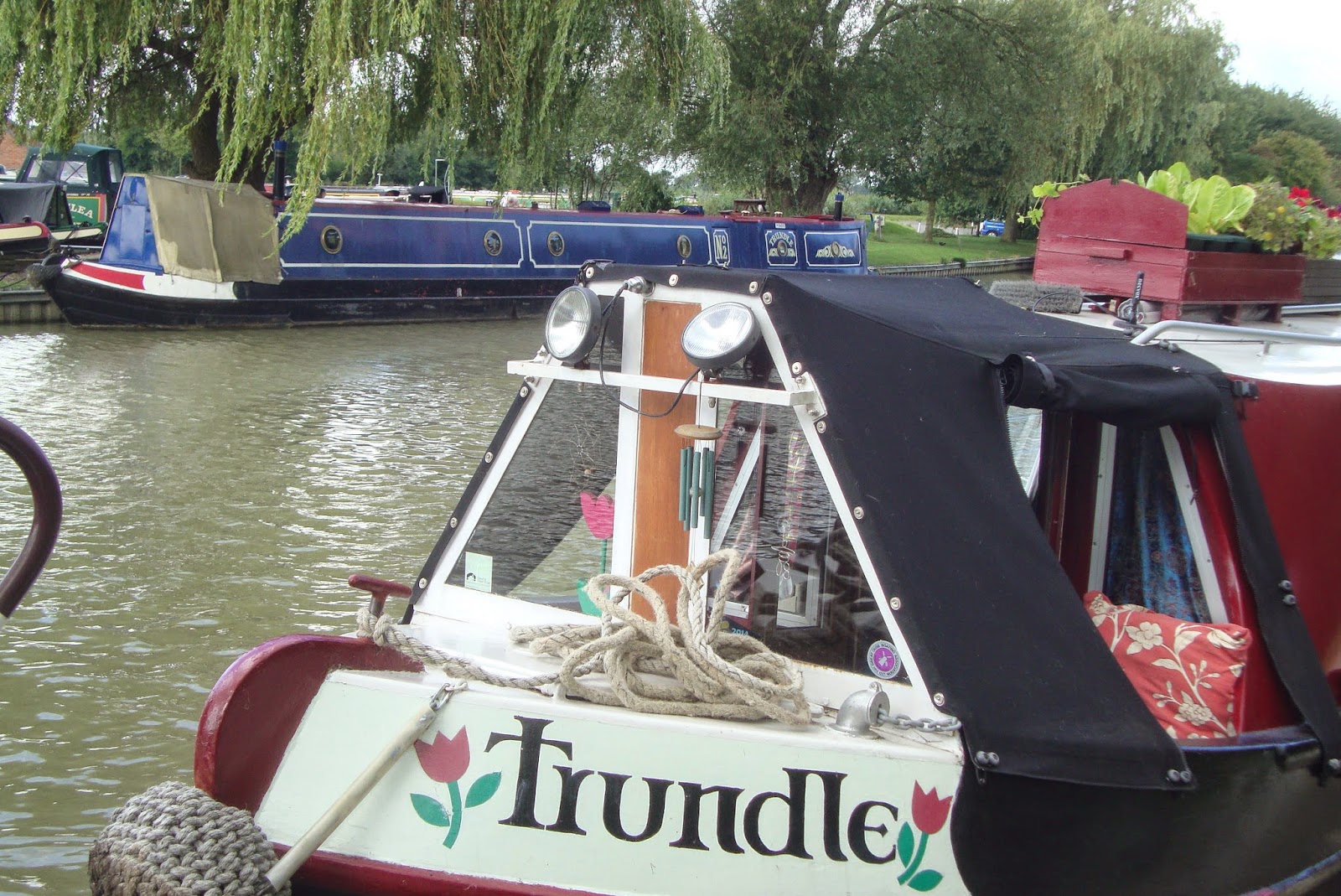 that blue boat is another Trundle !!!! 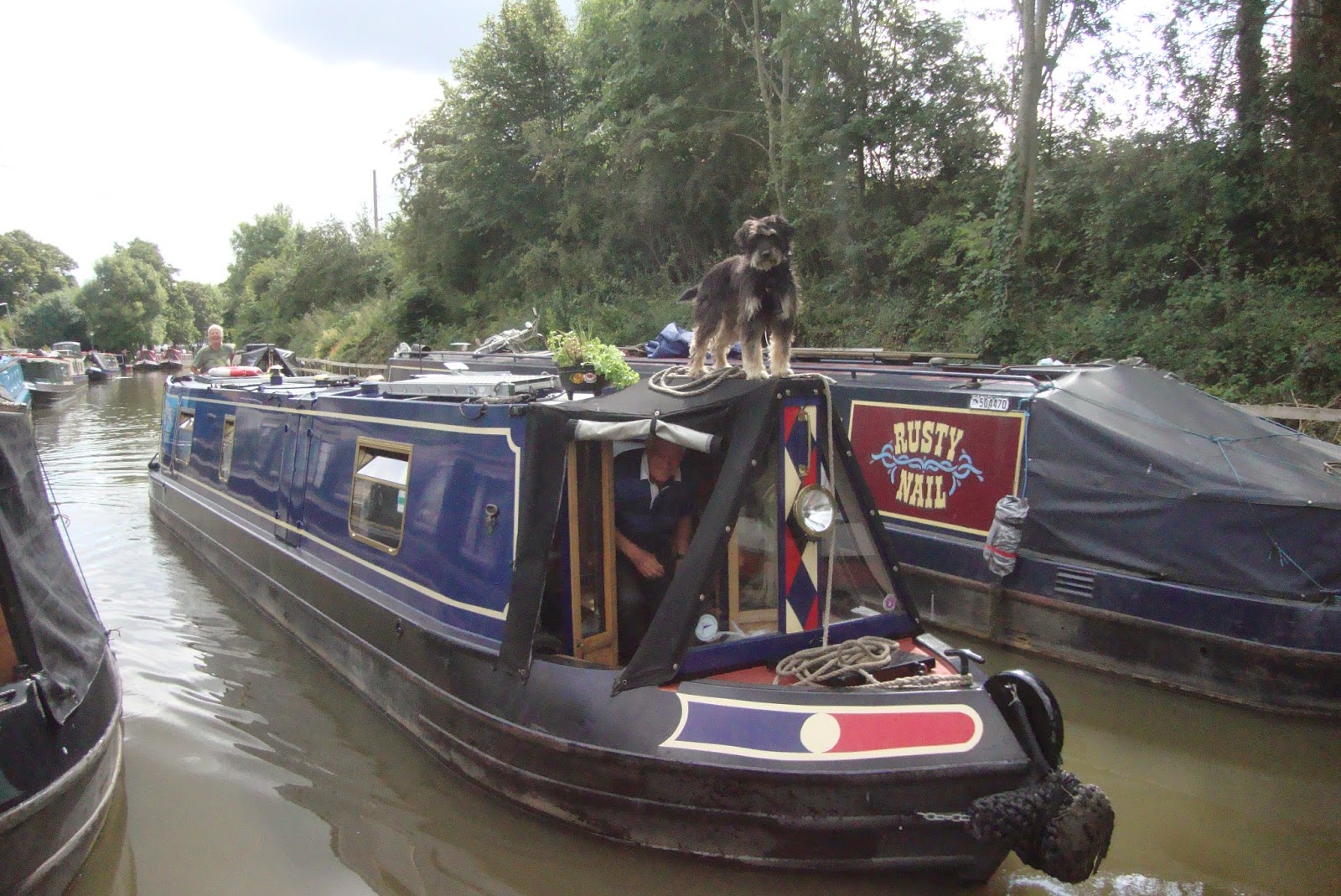 Steph, Midge on the top, and Mike poking his head out. Steph was crushed by a cow a few months ago. She is a lucky lady to have got away with bad bruises 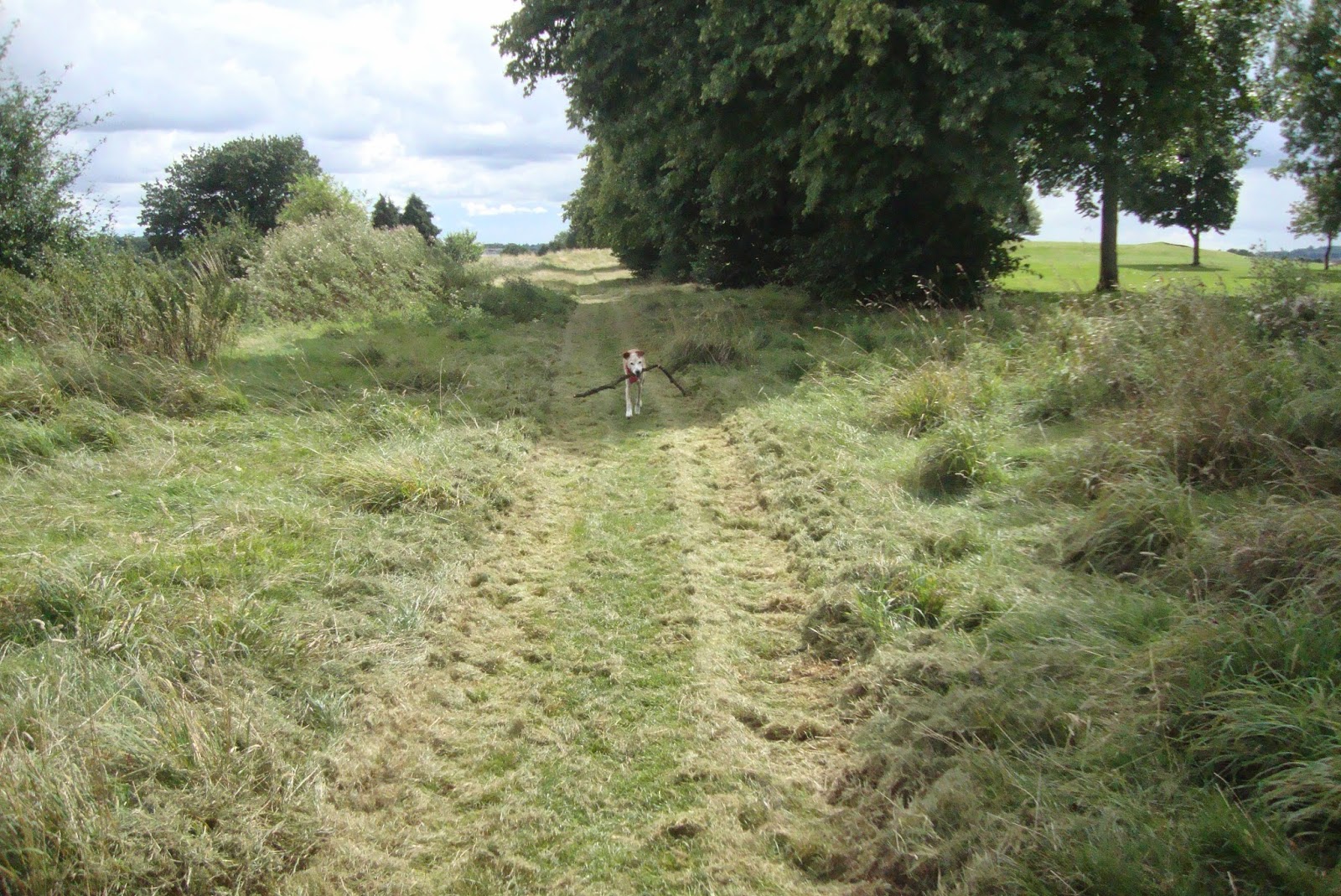 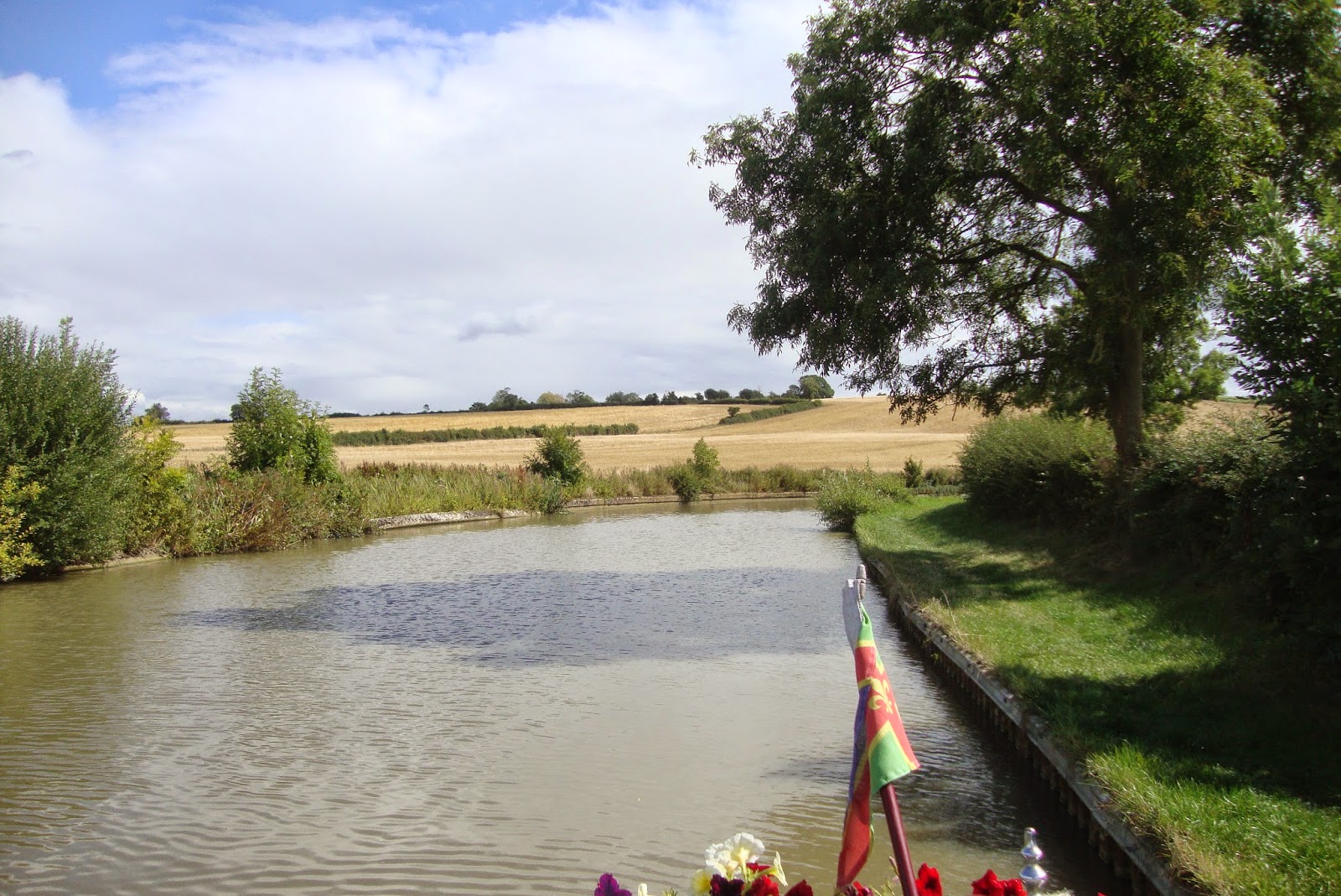